Kathleen Krueger: Improving the world where she lives 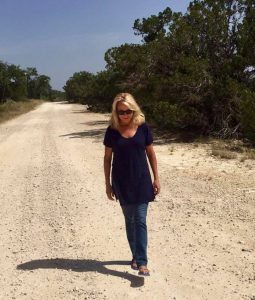 Kathleen Krueger, New Braunfels mayor pro-tem, and new Hill Country Alliance (HCA) board member, is a world traveler. She lived and worked on Capitol Hill in Washington, D.C. Krueger also lived in England, Botswana and in Burundi, Africa, where she cared for her children and led volunteer projects while surrounded by warfare and massive genocide. But her roots are in the Hill Country. No matter where she is living, Krueger finds a way to help the people and improve the environment.

“I have an innate feeling that you should be helpful to others where ever you are,” Krueger says. “That was behind running for city council; I found myself preoccupied with international issues I couldn’t do anything about, so I decided to be helpful where I am. I have done this anywhere I live.”

After graduating from Texas A&M University, Krueger worked as a legislative assistant in the office of U.S. Representative Sam B. Hall, Jr.
Krueger married Bob Krueger, former U. S. Senator and American Ambassador. During the years they lived in Africa, Kathleen was president of the Diplomatic Women’s Association. She also served on the board of an international children’s charity. She worked with Habitat for Humanity to build homes in remote African villages and led an International Red Cross expedition into the Kalahari Desert to provide clothing for the Bushmen of Botswana.

Krueger and her husband published an award-winning book in 2008 about their experiences living amid warfare and genocide in Burundi, Africa titled, “From Bloodshed to Hope: Our Embassy Years During Genocide.” The book received wide acclaim, including the Institute of Letters award for the best non-fiction book in Texas for that year. Then President Jimmy Carter, a winner of the Nobel Peace Prize, stated that the Krugers’ “outspoken defense of a suffering population helped advance human rights in Burundi.”

While living in Africa, Krueger completed an 85 kilometer bike race from the border of Botswana, Africa to Victoria Falls, Zimbabwe. She considers the race one of her greatest accomplishments. Here’s how Krueger describes that day: “The morning of the race a pride of lions was lying on our starting line. We raced through an area known to have the largest concentration of elephants on the African continent. The most trying moments were when my partner and I had to cycle alone past a herd of cape buffaloes with babies.”

Krueger was born in San Antonio. When she was 11 years old, Krueger moved with her parents and seven brothers and sisters to their family ranch near Bandera. “As a child, I had complete freedom to wander the pastures at will,” Krueger recalls. “I’d catch tadpoles in the creek and ride my horse alone through the hills for hours. It was an idyllic life.”

Kathleen and Bob Krueger have been married for 27 years. They live in the New Braunfels home where he grew up. They have three children: Mariana, 22, a graduate of Duke University who is currently teaching before entering Duke’s Graduate School in Global Health, Sarah, 20, is a junior with a Journalism/Spanish major at Duke University, Christian, 15, is a freshman basketball and trumpet player at New Braunfels High School.

Krueger says her travels have taught her that the world is a fascinating place. “We launch out into the world and come back here,” she says. “There is a special magic to the Hill Country in Texas, with its clear-running streams, diverse wildlife and magnificent trees,” Krueger says. “It is a treasure to be protected.”

To do her part to conserve this treasure and help her community, Krueger spends much of her time as a volunteer. In New Braunfels, she has served as a board member of the Children’s Museum, a P.T.A. officer, a Wurstfest volunteer and a Red Cross volunteer. She was a New Braunfels High School Band Booster for seven years and has been a board member of Eden Hill, Inc., a long-term care facility for the elderly. In 2009 she joined the board of Volunteers in Medicine, a non-profit organization dedicated to indigent health care in New Braunfels.

This is Krueger’s sixth and final year on the New Braunfels City Council. This year she is serving as mayor pro-tem. Her strongest advocacy has been for protecting family neighborhoods from commercial encroachment, preserving historic districts, and keeping the rivers clean and safe.

“My work on these issues is about preserving the quality of life in New Braunfels and maintaining the small town, historic feel,” Krueger says. “The population has grown from 30,000 to 60,000 in the years I’ve served on the city council.”

Krueger remembers growing up in Bandera, a town of 800 people. She says in the last 40 years, the face of the Hill Country has changed. “The life I had as a child is not as possible now, with so many ranches being divided,” Krueger says. “We used to give directions by local landmarks; there were no street signs or lights. Now I get stuck in traffic jams in Bandera, and there are multiple stop lights.”

Hill Country conservation is a very personal cause for Krueger because of her soul connection to this place that started when she was a child. “I want to maintain the beauty that exists so future children will be able to enjoy the kind of childhood I did.”

Krueger will continue her work to conserve the natural resources and cultural heritage of the Hill Country as a board member of HCA. “I am honored to serve on the board of the Hill Country Alliance with others who realize the importance of protecting the natural beauty and resources of this distinct region of Texas,” Krueger says. “I believe we have a sacred obligation to protect this gift of nature for future generations.”