Brian Richter, an international authority on river conservation and the director of The Nature Conservancy’s Global Freshwater Program, will be the keynote speaker for a statewide water conference being held by the Lone Star Chapter of the Sierra Club in Austin on Friday, April 27. Read More

Despite recent rains, drought far from over, experts warn

Most of Central and East Texas beat long odds with heavy rains this winter, but experts warned state lawmakers Thursday that the drought is far from over. State climatologist John Nielsen-Gammon said that the second year of a La Niña cycle — cooler temperatures in the Pacific Ocean that influence global weather patterns — produces a dry winter for Texas “4 times out of 5.” But Nielsen-Gammon said it’s a coin toss whether the recent winning streak will continue. “The (short-term) outlook is not particularly dire or good,” he said. Read more from Statesman.com.

A well driller wasn’t among the contractors Bobby Watson hired when he built a new home overlooking Canyon Lake. Like a growing number of Texans, he opted to get water from the sky. In the driest times, they had 6,000 gallons in the two 10,000-gallon storage tanks that are camouflaged to blend in with surrounding trees. With the average San Antonian using 130 gallons per person per day, they were never in danger of running out. Read more from SA Express-News.

“The purpose of a district, in my opinion, is to prevent harm that the rule of capture would allow and to try to the best of their ability to create sustainable aquifer production. The goal as much as possible should be one of sustainability.” Read more from Livestock Weekly.

“Texas is virtually the only state that functions by the “rule of capture,” which allows landowners to pump essentially unlimited amounts of water. Elsewhere in the U.S., groundwater is a public resource, and the state allows people to use the resource.” Read more from Texas Tribune.

The 5th Annual Texas Water Symposium series continues this month at Junction with a lively conversation about creating healthy watersheds. Distinguished panelists will discuss watershed planning as a proactive alternative to the traditional, piecemeal approach to managing natural resources and as a critical strategy for protecting limited water resources for future generations. Learn More

Groundwater is found in the spaces between particles and cracks in underground rock in formations known as aquifers. Even though it is out of sight, groundwater should not be far out of mind. In Texas, groundwater provides 60% of all freshwater used – great shortfalls are expected during the coming decades. Conservation is key. Learn more from the Texas Groundwater Protection Committee. Learn about groundwater resources from HCA here.

The 40 Gallon Challenge is a call for residents and businesses to reduce our region’s water use on average by 40 gallons per person, per day. The challenge began in 2011 as a voluntary campaign to increase water conservation. Learn More

Texas gets 80 percent of its water supply from aquifers, according to the Texas Water Development Board (TWDB). Aquifer water levels are declining because of drought and increasing demands on water supply due to population growth. The quality of aquifers also is in jeopardy from construction runoff, leaking toxic waste sites and storage tanks, injection wells, industry pollution, and the use of agrochemicals on farm land. Read more from Clean Houston.

The March 1st board meeting of the Texas Water Development Board in Austin drew a large crowd at the Stephen F. Austin building downtown. Many came to speak in opposition to the 30 ft decline or so called Desire Future Condition (DFC) of the Trinity Aquifer in Western Hays County and to support the Wimberley Valley Watershed Association’s request for developing a ‘Special Groundwater Management Area” (SGMA) for Jacob’s Well and the Wimberley Valley. Read more from WVWA.

Exactly how (the decision) will change the game is what everyone is trying to figure out. The case clearly established two things. First, that landowners legally own the groundwater underneath their land, and second, that landowners may be owed compensation if state or local regulations go too far in limiting the amount of groundwater landowners can pull. Beyond that things start to get a little murky. Read more from NPR.

The Lower Colorado River Authority’s decision to deprive downstream rice farmers of water – for the first time ever – was an especially dramatic example of the historic Texas drought’s continuing impact, even as unexpected winter rains have mitigated its severity somewhat. Read more from Texas Climate News.

While “bumper crop” might be a stretch of a prediction considering last year’s drought, local growers are expecting a good crop on area peach trees barring a late freeze. Read more from the Fredericksburg Standard. 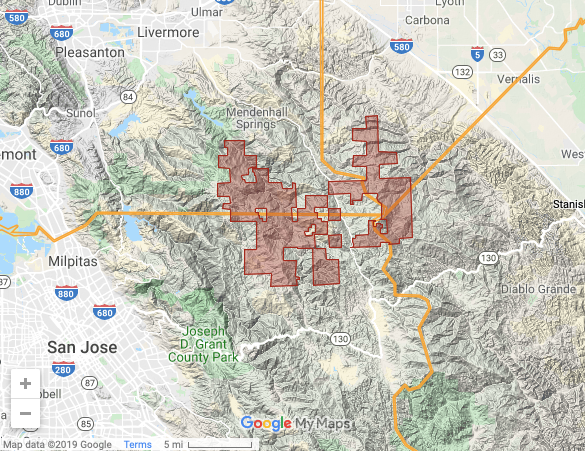