Texas is growing, and a concern in the water industry is whether the Lone Star State can keep up with residents’ water needs.

A three-person panel discussed this and fielded questions at the 8th Annual Texas Water Symposium series June 18 at the Hill Country University Center.

Following comments from Parker and the panel, the moderator invited the estimated crowd of 60 people to ask questions. 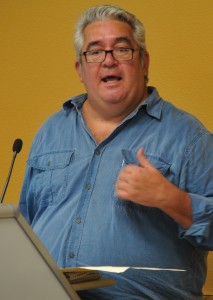 “Water is precious, and the Texas Hill Country is a very fragile, amazing region,” Parker said. “We’re one of the fastest growing regions in the country. Water issues are quite complex and on the top of everyone’s mind.”

He encouraged the crowd to get involved in the voting process so they can have a say in the management of water in their county, region and in the state.

“Water is the single most precious resource we have,” Parker said. “It determines the outcome of everything — population growth, agriculture, quality of life, you name it. Texas has never supported a population of 50 million people with the exact same amount of water we had in the 1940s and 1950s. I’d like to see how we can manage to do that.” 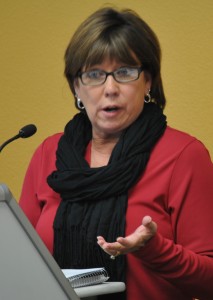 Texas will have to learn how to manage its water supply, especially with more people moving to the Lone Star State, Jackson said, adding that up to 1,000 people move to Texas daily.

“But, nobody’s bringing any water with them,” she said. “The board I’m on develops water plans for Texas. I want to make sure my children and grandchildren have the resources and water they’ll need for the future.”

Johnson believes having a strong water plan is crucial, given that droughts in Texas aren’t a matter of “if,” but “when.”

“Water conservation, we know from water planning, will meet one third of our future water needs,” she said. “We have funding available to make the state water plan a reality.” 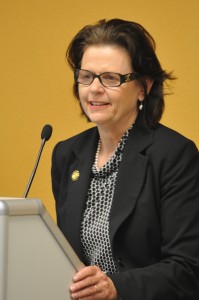 When she came into office in Burnet County in 2006, Klaeger saw there was no water plan.

“We took water for granted,” she said.

Klaeger saw various problems, including growth issues, utilities that were at least a quarter of a century old and no redundancy.

“If one community ran out of water, they were out until the problem was fixed,” she said.

Three communities had no water, and at one point for three years water had to be shipped in daily.

To improve their water system and plans, they held meetings similar to the symposium up to 10 times a year.

“We had everyone under the sun talking water to us — management, supply, planning, the history of water,” she said.

Through the Texas Water Development Board, the retired judge said, they obtained a planning grant and partnered with Llano County since they share three lakes on the border.

The plan approved in 2011 by the board allowed them to access emergency drought grant funding for the communities.

“Those three communities now have a new water treatment plant and a well,” Klaeger said. “And it’s working.” 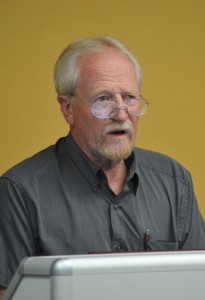 A geologist and University of Houston graduate who has done graduate work in hydrogeology at the University of Texas in San Antonio, Tybor was one of the original voting members of Region K.

Their current water plan is near completion, and Tybor noted that Gillespie County is the only county in Region K to not have a water shortfall.

However, there is a projected shortfall for Gillespie of 848 acre feet per year out to the year 2070.

“This shortage is seen in Fredericksburg’s demand and manufacturing demands,” Tybor said. “Strategies in the plan to meet the shortfall will be to implement conservation measures and add additional infrastructure utilizing ground water.”

They are managed under “desired future conditions.”

Parker noted that, according to HCA data, the average Fredericksburg resident uses 257 gallons of wa-ter per day while Americans average 120 gallons.

“But, it’ll take everybody in Texas working together,” she said about managing the water supply. “We have to move forward with new strategies and take personal responsibility. The beauty of our ap-proach is that it’s adaptive. As things change, we’re able to bring in new information, adjust our plans so we continue to meet the end goal.”

“In my mind, conservation is integral in every project we do,” she said. “It becomes part of the culture. We’ve seen amazing results in communities across the state.”

Parker said that dealing with the supply and demand for water involves public education and teaching people to modify their habits.

“Another important way of modifying human behavior (for water) is price,” Parker said. “The more ex-pensive a commodity is, the less we tend to use it or tend to be more careful.”

Jackson noted that conservation can be difficult for local governments, given how much revenue water usage brings in.

The economics of water brought up a question: Is the price of water too cheap?

Tybor added that the cost of water paid is based on existing infrastructure.

“Once new water strategies become a reality and are constructed, you’ll see an increase in the price of water,” he said.

Klaeger believes pricing is the key to conservation. She pointed out that when gas prices were higher, people cut back on their long trips.

“You consciously decide to use [water] or not,” she said.

She sees the price of water increasing when new, planned reservoirs are built in Texas.

Several people, such as lifelong Gillespie County resident Chuck Schmidt, expressed concerns that cedar trees consume a lot of water and wondered if landowners should receive assistance with cedar removal.

“We know how much cedar uses water,” he said. “That’s a huge problem.”

Klaeger recalled that when Highland Lake levels were down, the lake beds were full of cedar trees.

“I think it would make a huge difference in Texas if we did some sort of eradication project,” she said.

Tybor noted that cedar management is in the Region K plan as a strategy and that it could eventually make it into the state plan if funding is available.

One audience member, though, felt the concerns over cedar’s water consumption were misguided.

Bob Webster, who has a ranch in Kendall County and works in the plant business, cautioned the crowd of “vilifying” cedar to the extent he’d heard.

“There’s no doubt that if you remove cedar, you will improve your land,” Webster said. “You’ll get a lot more native grass and native shrubs, and you’ll get a much more attractive landscape. But, expecting to get a whole lot more water out of [removing cedar], that’s a myth. I’ve done a lot of cedar clearing on my land. What I think most of us have found is when you remove cedar you get wonderful native grasses, but you don’t get any more water in your ponds.”

One resident asked Tybor how water usage from 15 years ago compared to now, with all the vineyards in Gillespie County.

The manager explained that the amount of water needed by a vineyard after it’s established is “pretty low.”

“The water district has a set of rules that require all wells used for irrigation to be permitted,” Tybor said. “The wells have a cap on how much water they’re able to use. It’s reported back to us annually.”

“We also have in our rules that if an area in our district starts to see depletion, such as aquifer mining, we can designate a critical ground water depletion area over that specific area that’s experiencing min-ing in the aquifer,” Tybor said. “When that happens, we can go in and start cutting back production to get the aquifer back to sustainable.”

“Today’s farmers are tremendously efficient and have invested a lot in technology,” Jackson said, pointing out what she’d recently seen in West Texas.

At one cotton farm, they’d reduced water consumption by 50 percent while increasing production by 300 percent.

“Farmers can be up to 98 percent efficient, and we need to continue working with them so they’ll have the resources to continue,” she said. 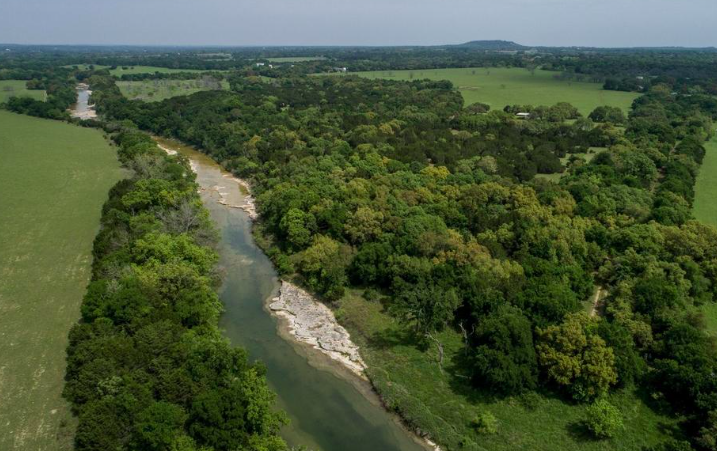 A gift for Texas: Collins family donates easement on 531 acres in Williamson County
More than 50 years ago, Michael Collins and his father bought land north of Liberty… 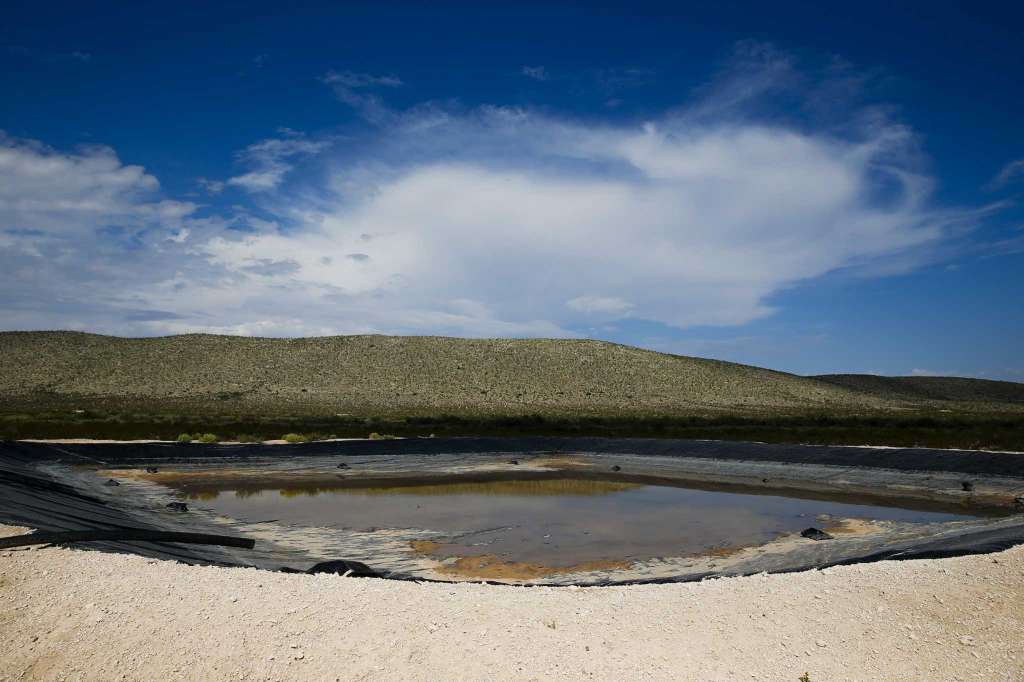 Board approves proposal to use aquifer to supply hydraulic fracturing operations
A West Texas board unanimously approved a contentious project to drill into a desert aquifer…
Wind farm and transmission line updates from SOSHE
Final CREZ lines have been completed, a public meeting will be held in Stonewall May…
Get Involved
Donate
Subscribe
Shop
Upcoming Events