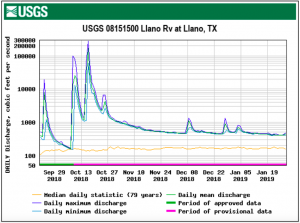 Just released: Due to delays associated with the shutdown, USGS just published discharge measurements made last December at 700 Springs. The flow is 24.4 cfs, the highest recorded since 2008, following a very wet 2007.

This article was taken from the Llano River Watershed Alliance Newsletter, the Watershed Week in Review. Access this newsletter and past editions here.

For more information – or to subscribe to the Watershed Week in Review – check out the Llano River Watershed Alliance website here.

“And, we know that its springs and pristine rivers are its jewelry,” Con Mims at…