Despite scattered rainfall, the Colorado River basin remains in a severe drought that is affecting water supply, LCRA staff told the Board of Directors this week. As a result, LCRA is considering whether to take additional drought management actions. Read full LCRA media release here.

The most severe drought in the nation is drying up one of Austin’s most treasured natural resources, the spring-fed Barton Creek Pool where more than 400,000 visitors from around the world flock each year. Read full SA Express story here.

Texas AgriLIFE Extension Service and the NRCS office have planned an educational program to be held on September 3 at the Pedernales Electric Coop Auditorium in Johnson City beginning at 6:00pm and concluding by 8:00pm. The program will address options available to cattlemen as they try and make sound management decisions as to what is best for them and the herd, as well as the rangeland. Read full Blanco County News article here.

The drought has gotten so bad in the Hill Country that when the twin grandchildren of Bob Sharpe visit his place near Nutty Brown Road, they have to take an outdoor “cowboy shower” by having grandmother Sue Sharpe dump water on them from a bucket. For three months, his well has been dry, so several times a day, Bob Sharpe steers his blue Chevy pickup to the nearby Cedar Valley Grocery, which gets its water from a Colorado River pipeline, to fill his 200-gallon plastic tank, plus a dozen emptied Newman’s Own grape juice jugs strewn across the truck bed. Read full Statesman.com commentary here.

The Reality of drought

The ongoing drought has kept water not only in the local headlines, but regionally throughout the Hill Country from San Antonio to Austin. As the drought persists, water availability, which by definition of State water planners is “the maximum amount of water available during the drought of record, regardless of whether the supply is physically or legally available”, is being reduced. Read full article here.

Drought will force some tough choices

After the 1930s and the construction of the massive Highland Lakes, our water supply seemed more or less infinite. Today, with our regional population topping 1.6 million, it is becoming very clear that the reservoirs do indeed have a bottom. Read full Statesman.com commentary here.

It’s Not Just About the Drought

Many more people have moved to the Hill Country since the last drought and have substantially increased demand on the water supply. “In some places, we have already exceeded a safe yield – water that is available during a drought,” Read the full article here.

Rainfall patterns at the Fly Gap

After a wet first half of 2007, why did dry conditions return in late 2007 through early 2009? What are our rainfall prospects for the coming year? What are the long-term trends for rainfall in central Texas? How will global warming affect our rainfall patterns? Read full article by David M. Hillis here.

The Barton Springs/Edwards Aquifer Conservation District is proposing to create a new, extreme stage of drought that would require a 40% cutback in groundwater pumping for all permitted users. The proposal is one of a package of rule changes designed to respond more effectively to extreme and prolonged droughts, and to manage more equitably groundwater resources. Read full release here.

At the next turn of the century, with the Austin area looking something like today’s Houston, Travis County will see a near-tripling in water demand. Williamson and Hays counties will require four or five times as much water as they do now, as our descendants will need water to drink, to bathe and to wash clothes and dishes. And on the Gulf end of the Colorado River, in Matagorda County, demand for water will roughly triple with new power plants requiring it to help cool their systems and power their turbines. Read full Statesman.com article here.

Each day without rain, the sparkling water of Medina Lake recedes farther from the homes at its edge, forcing those who take a dip to traverse a dusty moonscape of rocks and docks left high and dry. Across the region as water dwindles in lakes, rivers and wells, communities are hoping to avoid a repeat of conditions seen decades ago. Read full SA Express-News article here.

Groundwater users in the Barton Springs/Edwards Aquifer Conservation District expressed concerns about groundwater supplies holding up if the current Critical Stage drought worsens. The District held town two hall meetings on June 2 and June 8 in Sunset Valley and Buda to review and get feedback on proposed rule changes that would better prepare the District to regulate and conserve groundwater resources during extreme drought. Read full release here. 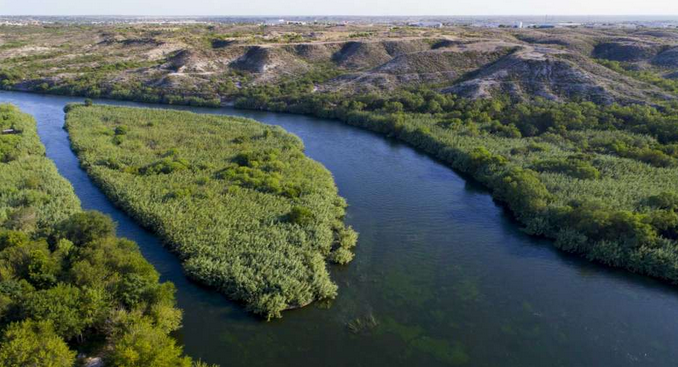 Texas Senate approves using herbicides to fight illegal border crossings
It’s not a wall and it isn’t more boots on the ground, but the Texas…
Our Desired Future at the Legislature and in the Field
“The 2013 Legislative Session may have been all about water, but it's clear from the…
Get Involved
Donate
Subscribe
Shop
Upcoming Events