What Mike says to San Angelo can apply throughout the Hill Country, “If San Angelo and the region are to continue to survive and prosper economically and if Texas is to be sustainable with its limited water resources, then residents must learn to conserve water all the time — not just in drought situations.” Learn More

Applications are being accepted for the 2012 Texas Rain Catcher Award. The Texas Water Development Board holds the annual competition to promote the technology, educate the public in the practice of harvesting rainwater, and recognize excellence in the application of rainwater harvesting systems in Texas. The competition is open to all individuals, companies, organizations, municipalities, and local and state governmental entities in Texas. The deadline for submitting an entry is December 31. Learn More

Two Austin schools – J.J. Pickle Elementary and Eden Park Academy – are receiving financial assistance to help conserve water resources at their schools and teach students about the value of water conservation. Both schools have been awarded grants by the Rainwater Revival, an annual event that brings together water conservation experts and the public. Learn More

Save It for a Sunny Day

Hard-packed, fractured stretches of bone-dry earth and pale, cloudless skies with months of unrelenting heat isn’t exactly an appropriate backdrop for a conversation about rainwater harvesting. Or is it? Sanjeev Kalaswad, rainwater harvesting coordinator with the Texas Water Development Board and a leading proponent of rainwater harvesting in the state, thinks it’s just the right context for enlightening Texans about collecting and storing rainwater.Read more from Texas Co-op Power.

Texas Counties Must Get the ‘Big Picture’

Kerrville and much of our Texas Hill Country, has a limited amount of water to spare—either groundwater or surface water. In recent decades many of the Central Edwards Plateau counties have boomed in population, growth and tourism activity. Read HCA Advisory Board member Mike Mecke’s article in Ranch & Rural Living Magazine.

Elementary and Middle Schools in 17 Hill Country counties now have until June 15 to apply for classroom grants focused on teaching water conservation and rainwater catchment to students, courtesy of the annual Rainwater Revival. Grants of up to $900 per selected application will be awarded for use during the 2012-2013 school year. Learn More

The Hill Country Alliance, organizer of the Rainwater Revival, is seeking grant applications from elementary and middle schools in 17 counties throughout the Hill Country to be used for water conservation education or rainwater harvesting projects at school sites. Learn More

Everyone interested in the quality of their rainwater is invited to the first Water Wise Conference, Saturday, April 28th at McKinney Roughs Nature Park in Cedar Creek, Texas. The program, “What’s in your rainwater – and how do you find out?” will begin at 9:30 a.m. and feature Environmental Laboratory Services/LCRA chemists Tess Abbott, Ariana Dean and Susan Benavidez. The three-hour event will include extensive “Q&A” as well as hands-on opportunities to practice using various water testing equipment. Learn More

A well driller wasn’t among the contractors Bobby Watson hired when he built a new home overlooking Canyon Lake. Like a growing number of Texans, he opted to get water from the sky. In the driest times, they had 6,000 gallons in the two 10,000-gallon storage tanks that are camouflaged to blend in with surrounding trees. With the average San Antonian using 130 gallons per person per day, they were never in danger of running out. Read more from SA Express-News.

The study took over a year to complete and is a survey of vendors in the rainwater harvesting market. Learn More from HarvestH20.com. 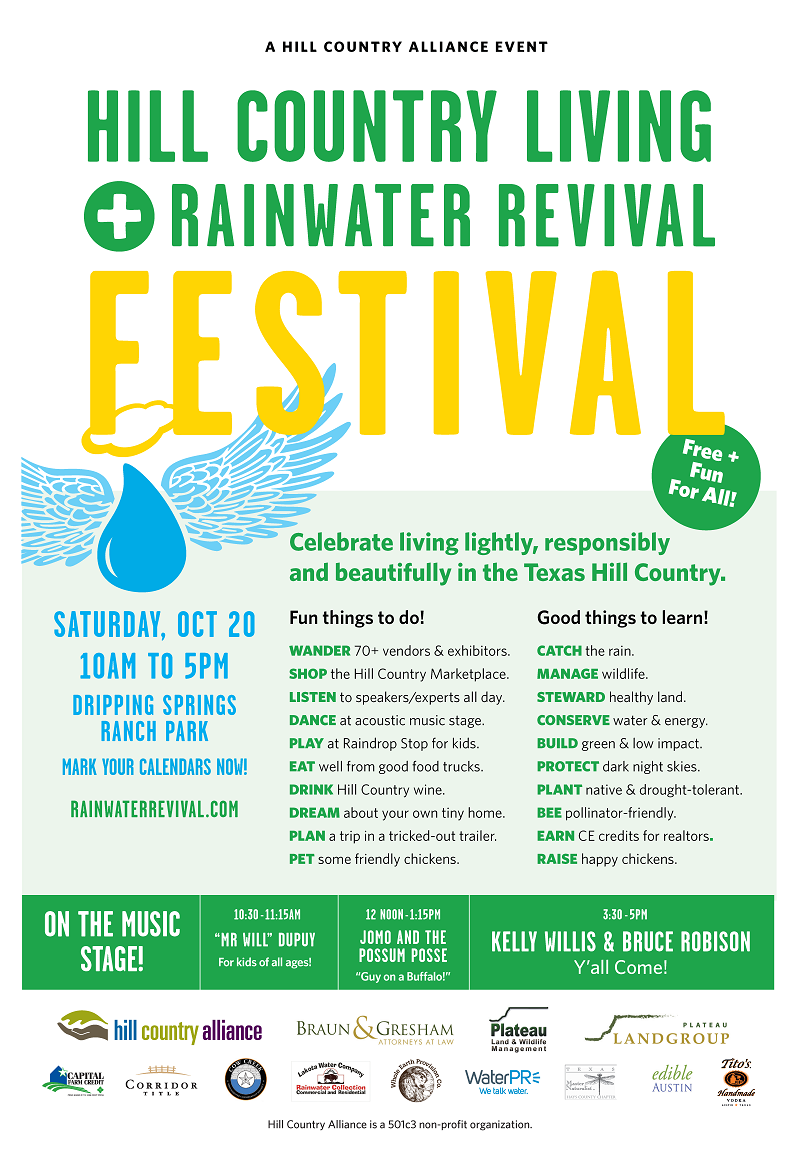 October Director’s Notes: FESTIVAL, Rainwater Raffle and more!
The recent rains that have fallen across the Hill Country have me looking forward to…