Groundwater is one of the most valuable resources in the Hill Country. Our underground aquifers provide water for homes, businesses and agriculture. Groundwater also serves as the reserve supply for future residents, since most aquifers do not recharge as quickly as we deplete them. Our aquifers are a vitally important source of water for the Hill Country’s hidden gems: our springs, small streams and creeks and clear running rivers. However, our groundwater supply is limited and under increasing pressure from a growing population. If this resource is to sustain our communities, future generations and the environmental treasures of the Hill Country, it must be carefully managed.

HCA’s mapping resources are available to help visualize the hydrology of the region. By viewing our interactive map tool, you can see areas that are more vulnerable to groundwater degradation, regional aquifers, groundwater districts, watersheds and more.

The Rule of Capture and the DFC Process

The law in Texas generally provides that landowners have the right to capture and use the groundwater beneath their land under a doctrine called the Rule of Capture. However, the Texas Legislature has recognized the need for groundwater management by establishing numerous local Groundwater Conservation Districts (GCDs) to develop groundwater management plans, regulate the spacing and production of wells and monitor aquifer conditions. Since aquifers don’t follow political boundaries, these districts also work together to manage shared aquifers through Groundwater Management Area (GMA) programs. These GMAs are directed to come up with “desired future conditions” (DFCs) for the aquifers: they must agree upon how much water can and should be pumped now and in the future and how that pumping will affect the future state of the aquifer. Most often, the DFC is an average aquifer draw-down measured in feet. Some GCDs measure their DFCs as specific spring-flow rates. GMAs throughout the state will begin the second round of this process in the Fall of 2015, and the decisions they make will impact future generations.

The DFC process was established in 2005. It is to be reviewed on a five year cycle, and is overseen by the Texas Water Development Board. In the Hill Country’s GMA 9, the 30-foot DFC was not popular by many and considered to be a major threat to spring flow. Now is the time to get involved and work towards a more conservative DFC by 2016.

Your opinion matters. To inform your Groundwater District of the future that you desire for your aquifer, go to the excellent Our Desired Future website.

Much more on this topic including many comments and resources from the DFC decision making process here.

More information from TWDB on the DFC process

The Central Texas Hill Country area includes all of GMA 9 and parts of GMA 7, 8, and 10.

View a map of all of the GMA’s in Texas and more information from the Texas Water Development Board.

There are numerous existing and proposed water plans that call for transfers of water from one area to another. Hydrologists recognize the economic and ecologic perils of de-watering one region to satisfy the desires of another. There are proven examples of unregulated sprawl generated by externally sourced water supplies. Unregulated sprawl creates a variety of stresses that put the Hill Country’s clean rivers and aquifers at risk.

The Trinity Aquifer beneath Hays County is declining in overall average water level due to increased use by a growing population and a very slow rate of recharge. Well levels are dropping and spring-flow is slowing. The Houston water marketer Electro-Purification wells are being tested and permits are being submitted to the area’s groundwater conservation districts for ever increasing volumes. More news here.

Electro-Purification has submitted a request to pump up to 2.5 Million Gallons per Day (MGD) from the Middle Trinity Aquifer. Staff from the Barton Springs Edwards Aquifer Conservation District have crafted a phased approach permit that requires an initial limitation of  0.5 MGD production to assess the effect on neighboring wells. District Staff have required that EP finance a mitigation fund designed to pay for damaged wells, and given the ability to deny up-phasing of production if aquifer damage is too great.

As of July 1, 2018 there were 312 Public Comment letters and 9 requests for contested case hearings on that Electro-Purification production  permit.

Needmore Ranch in Hays County has submitted an application to the Barton Springs/Edwards Aquifer Conservation District for a Regular Historical Production Permit to authorize withdrawal of an annual permitted volume of approximately 289,080,000 gallons per year from the Trinity Aquifer. The Applicant will continue to operate the existing well for wildlife management and future agricultural uses. In an effort to extract itself from the 289 million gallon per year pumping cap, Needmore Ranch has asked that the State Legislature allow them special legislative permission (HB-4045) to convert its property’s jurisdiction to a neighboring groundwater district where it may find more favorable pumping terms. For more and up-to-date information, visit the Trinity Edwards Springs Protection Association (TESPA) and the Barton Springs/Edwards Aquifer Conservation District websites.

The discharge of effluent into streams in the contributing and recharge zones of any aquifer can be a potential source of drinking water contamination. A recharge zone is the area where the aquifer reaches the Earth’s surface. Hill Country creeks and rivers exchange water with aquifers in these zones and our fast flowing karst (porous) limestone can be a direct conduit for pollution into the aquifers from which we draw much of our pure drinking water. Most Hill Country ranches and many Hill Country communities and cities rely on the continued purity of the Edwards and Trinity Aquifers. It is critical that we protect our aquifers from harmful contaminants.

The City of Dripping Springs has requested a new permit from the Texas Commission on Environmental Quality (TCEQ) to discharge treated sewage into a tributary of Onion Creek. Currently, the city disposes of its waste water by way of irrigation. Downstream property owners, municipalities, and clean water advocate groups  are concerned by the possible degradation of this pristine Hill Country stream by nutrient rich and contaminant laden treated effluent. Additionally, both of the area’s aquifer districts have voiced opposition to the discharge permit citing a recent scientific study illustrating that Onion Creek flows into the Trinity Aquifer just downstream from the city’s discharge point – and thus could potentially introduce contaminants into tens of thousands of local residents’ drinking water wells. ProtectOurWaterNow.org has the most comprehensive website for documentation related to this requested permit, resolutions, and science.

Southwest, northern Travis, and Williamson Counties are the last unprotected areas in the Hill Country.  Various proposals have been tendered to create a GCD for the management and protection of Southwest Travis County’s groundwater resources and to bring that area into Texas Commission on Environmental Quality compliance (see PGMA paragraphs below). With stakeholder input, Travis County officials have constructed a list of guiding principles that will act as minimum criteria for the formation of any new GCD in Travis County. Those criteria are consistent with current groundwater law and serve to insure that any GCD formation has the full rights and obligations of other functional GCDs. Read those criteria here.

Representative Paul Workman filed HB-922 (which was passed as HB-4345) in the 85th Legislature to allow a confirmation election to create a Southwest Travis County GCD. The Travis County Commissioner’s Court determined that the legislation adheres to enough of the stakeholder’s guiding principles for an effective conservation district and has endorsed it. Director positions will initially be appointed as follows: Representative Workman, Senator Buckingham, Commissioner Daugherty will appoint 2 temporary Directors each, and Travis County Judge Eckhardt will appoint 1 Director.  By statute, District and Director confirmation elections must be held in the spring of 2018 or spring of 2020. (Much more information HERE)

In 1990, the bulk of the Hill Country was designated by TCEQ as a “Priority Groundwater Management Area,” or PGMA, because the Trinity Aquifer was expected to encounter critical water shortages in the near future. One significant area in this PGMA still does not fall under the jurisdiction of any conservation district: Western Travis County. There is no authority in this area to manage the use of groundwater, it is left to the broad “Rule of Capture.” As a matter of best management practice, the endangered Trinity Aquifer should be protected across its entire area.

In 2010, TCEQ recommended the formation of a new GCD to manage the Trinity Aquifer in Hays, Comal, and Southwestern Travis counties jointly. Political forces have prevented this regional GCD from forming. Read the study here.

A similar study was conducted in 2004 for the Trinity and Edwards Aquifers in Williamson, Burnett, Northern Travis Counties. That study concluded that a groundwater management plan for that PGMA was needed but that formation of GCDs in Williamson and Travis Counties was politically unattainable. Read the study here.

Here is news from the 2017 85th Texas Legislature.

Texas State Rep. Erin Zwiener (D-Driftwood) presented several house bills for the 87th Texas Legislative Session in committees this week, one of which is heading to the house floor. Zwiener presented House Bill 48 to the House International Relations and Economic Development Committee and House Bills 2344 and 2350 to the House Public Education Committee and…

NOTE: Although this article was written for a Kendall County audience, the bill itself would apply throughout the Hill Country Priority Groundwater Management Area (PGMA), covering all of Bandera, Blanco, Gillespie, Kendall, and Kerr Counties, as well as parts of Bexar, Comal, Hays, and Travis Counties.  The citizens of Kendall County who are directly affected by…

In an email to customers on Thursday, the comany announced it has updated its Drought Management Plan to promote resource conservation and align with regional water-planning efforts. The utility said it is trying to balance the area’s growing demand for water against the challenges of a dry climate. Read more from Stephanie Johnson with My Canyon…

The Hays Trinity Groundwater Conservation District in central Texas urges residents to “please protect your aquifer by limiting water use.” The district manages groundwater in Hays County, Texas, one of the top five fastest-growing counties in the U.S. Due to drought, the district has imposed a 20% curtailment on groundwater pumping districtwide and a 30% curtailment… 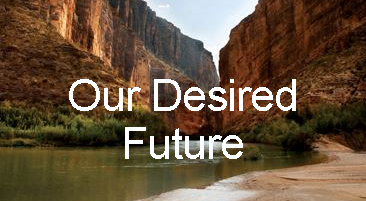 Issue Paper: One Water in the Texas Hill Country

Hydraulic Fracturing and Water Resources: Separating the Frack from the Fiction

The Fallacy of Vested Groundwater Ownership

Are We Sucking the Trinity Dry?

How Texas compares when it comes to water permitting

More Links
"All my life I have drawn sustenance from the rivers and from the hills of my native state... I want no less for all the children of America than what I was privileged to have as a boy."   -Lyndon B. Johnson
Donate
Copyright 2015 - All Rights Reserved