The Hill Country is an incredibly ecologically diverse landscape that is home to native species found nowhere else in the world. Land stewardship, protection of open space and thriving populations of wildlife go hand-in-hand — healthy populations of native wildlife demonstrate that your land is part of a functioning ecosystem. Documents and links on this page provide information on native Hill Country wildlife species and managing land for wildlife.

Axis deer are an exotic species that were introduced from India to the Texas Hill Country in the 1930s. Since their introduction, this species has proliferated in several portions of the Hill Country, adversely impacting native wildlife, agricultural production, and riparian, or creek-side, habitat. The Hill Country Alliance is involved in an Axis Deer Control Project serving Gillespie County – details here. The goal of the Axis Deer Control Project is to raise awareness about the impacts of free-ranging Axis deer, recognize land stewards for their efforts to control this exotic species, and support research that will improve management. 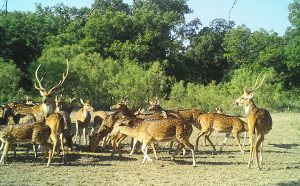 Exotic species such as Axis deer can out-compete native white-tailed deer because of several traits. Axis are able to shift their diet to grasses, once they have eaten desirable forbs and browse. White-tailed deer, however, cannot switch their diet preference, and will eventually suffer from malnutrition if grass is the only available vegetation.

Texas Tech University Ph.D. student, Matthew Buchholz, adds that Axis deer are also physically larger and more aggressive than native white-tailed deer. They can browse on their hind legs between 6 – 7 feet and, when in herds that can exceed 150 animals, may physically displace white-tailed deer and other animals from optimal habitat and food sources.

High-fencing can be cost-prohibitive for some landowners and they are seeing losses with grain crops such as corn, milo, and Kline grass, as well as cereal crops such as wheat and oats.

During a recent drought, Peggy Sechrist recalls watching a herd of approximately 75 Axis deer migrating up and down the Pedernales River and into her pastures. “We watched the Axis compete with our cattle for grass and eventually we destocked our livestock in order to save our soil health while we strategized a plan to decrease Axis numbers.”

Free-ranging Axis deer prefer riparian habitat along rivers and their tributary creeks. When riparian areas are characterized with a diversity and abundance of deep-rooted, native plants, they provide a variety of values such as flood mitigation, erosion control, fish and wildlife habitat, and improved water quality.

Along some stretches of the Pedernales, Guadalupe, and Llano Rivers, free-ranging Axis deer are denuding riparian vegetation: native switchgrass and eastern gamagrass; oak, pecan, sumac, persimmon, and cedar elm trees; and a variety of sedges. When riparian vegetation is excessively removed—whether from free-ranging Axis deer, mowing to the water’s edge, or continuous grazing—these areas no longer function properly to provide the values we all seek.

Unlike white-tailed deer, which have a set hunting season, Axis deer may be hunted year-round with a hunting license; they may also be trapped.

The Texas Hill Country is a unique region of pristine springs, sprawling landscapes, diverse wildlife, star-filled skies, multi-generational land stewards, historic towns, and hidden oases. With a rapidly growing population and increasing development coming into the region, many of these special qualities are at risk of being lost forever.  For the 14th annual Hill Country photo…

Earlier this month, I went shopping at H-E-B and bought more food than I needed. But I wasn’t stocking up my bunker; I was buying supplies for a camping trip at Big Bend National Park. Back then—a whole couple of weeks ago—the new coronavirus still felt relatively abstract. I was planning to spend spring break with…

South Central Texas and the Texas Hill Country are in the central flyway for migratory birds flying north for spring and summer breeding, according to Bexar Audubon Society (BAS) in San Antonio, which is officially the local National Audubon Society (NAS) chapter for Comal, Guadalupe, Kendall, Medina, Bandera and Wilson counties. “While the world’s thoughts this…

The vast majority of Americans approve of hunting according to Responsive Management, an internationally recognized survey research firm in natural resource and outdoor recreation issues. A recent survey in conjunction with the National Shooting Sports Foundation revealed the current approval rating of hunting by Americans 18 years of age and older is the highest it’s been…

Guadalupe Bass After the Flood

Bird Count & Health of the Land

Endangered and Threatened Animals of Texas