Gary Puryear said he did not know much about nature conservation when he inherited his father’s 423-acre ranch near Hamilton Pool Road in Western Travis County. Members of his family had owned and lived on the working ranch since 1880, and Puryear said the emotion of losing his father made it difficult to decide whether to keep the land or sell it to a developer.

However, when he learned of the vast environmental benefits maintaining the land would bring to the area, he said the decision to officially designate the ranch as a conservation easement in 2018 was a win-win for his family.

“I came to realize just how important it was to put our ranch into a conservation because we were creating a legacy for our family,” Puryear said. “I didn’t want to be the person to sell it off; I wanted to be the one to preserve it.”

Conservation easements are agreements between landowners and area entities that allow a landowner to retain ownership of a private property while selling much of its development rights for money. 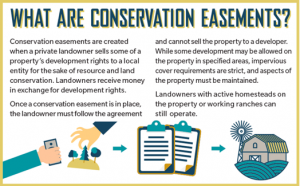 Save the date for the October 8th Water Forum: Securing our Water Future

On May 15th, the Fredericksburg City Council passed a resolution affirming its support for the…