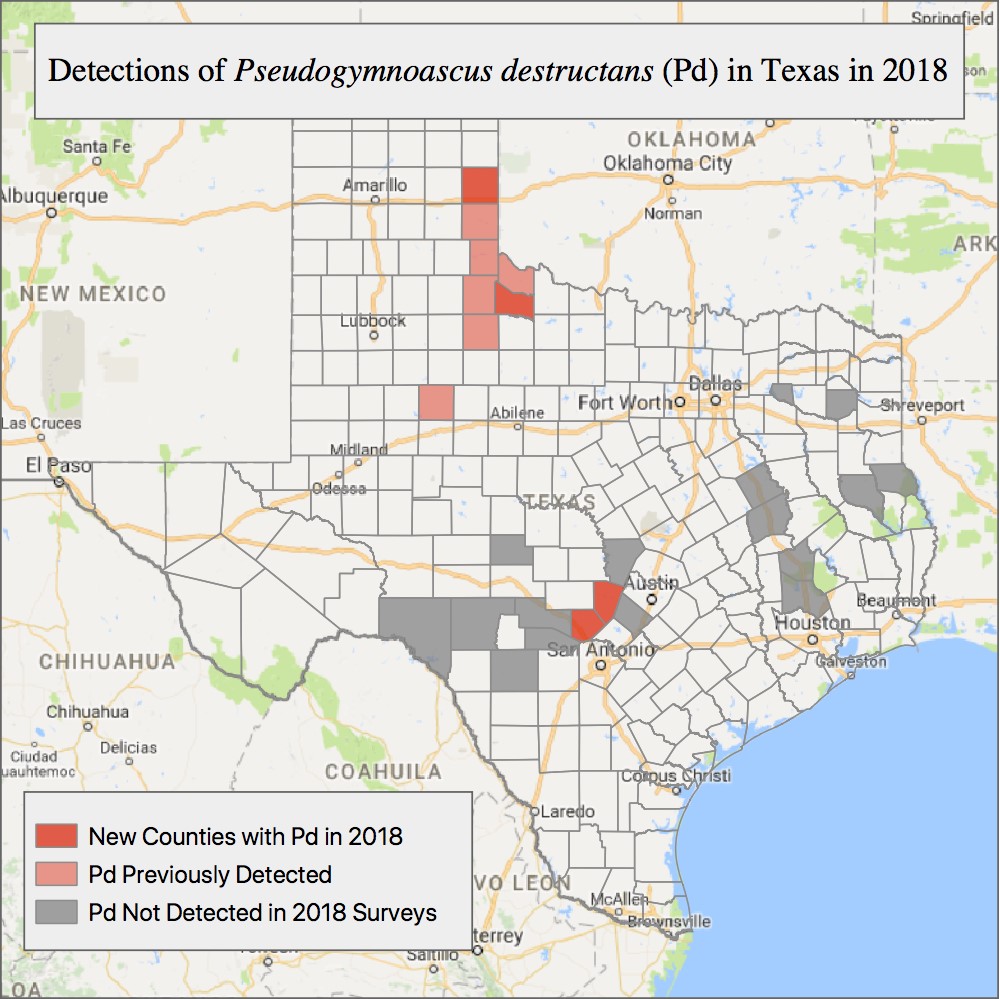 The fungus that causes white-nose syndrome (WNS) in bats, detected for the first time in Texas in early 2017 in the Panhandle, has now spread into Central Texas.

Though no bat deaths have been attributed to WNS in Texas, the syndrome has killed millions of bats in the eastern parts of the United States, raising national concern. A coalition of groups in Texas is continuing work to monitor the spread of the disease.

The fungus was detected at several sites in four new counties this year including: 2 sites in Blanco County, 1 site in Foard County, 2 sites in Kendall County, and 1 site in Wheeler County. This brings the total number of counties where the fungus has been detected in Texas to 10. The fungus was detected on cave bats, tri-colored bats, Townsend’s big-eared bats, and on a single a Mexican free-tailed bat. No signs of WNS were reported. Biologists say it usually takes a few years after detecting the fungus for the disease to manifest.

The detection on a Mexican free-tailed bat was at Old Tunnel State Park in Central Texas. This is first ever detection of the fungus on this species.

“While Mexican free-tailed bats are not expected to be susceptible to WNS, we are concerned because they migrate in large numbers and may help spread the disease further into the western United States or into Mexico,” said Jonah Evans, a mammologist with the Texas Parks and Wildlife Department who oversees the agency’s bat program. “Kendall County is now the southernmost county with the fungus in the United States.”

White-nose syndrome is caused by the fungus Pseudogymnoascus destructans and has been rapidly spreading since its discovery in New York in 2007. In some areas there have been declines in winter bat numbers of greater than 90 percent. Because bats usually produce just one offspring per year, researchers are concerned it could take many decades for some populations to recover from a major decline.

Skin swabs that test for presence of the fungus on bats’ wings and muzzle were collected between December 2017 and March 2018 by biologists from Bat Conservation International (BCI) and Texas A&M University’s (TAMU) Department of Wildlife and Fisheries Sciences and TAMU Natural Resources Institute. Analyses were conducted by the Northern Arizona University and the National Wildlife Health Center as part of on-going research projects. BCI is currently testing an experimental treatment for WNS on bats in the Texas Panhandle.

“Treating white-nose syndrome is extremely difficult as bats can spread the fungus long distances, the fungus can persist for in the environment for long periods of time, and cave ecosystems are sensitive and frequently contain rare species that may be impacted by certain treatments,” Evans explained. “TPWD is supporting treatment development and field trials when possible while working to ensure potential impacts to caves and non-target species are minimized.”

Bats play an important role in the ecosystem by consuming large numbers of insects. Recent studies have shown that the value of insect control by bats to agriculture is $1.4 billion annually in Texas alone. This value includes reduced crop loss to insect pests, reduced spread of crop diseases, and reduced need for pesticide application.

TerraScena is a new 100% rainwater harvesting community in Dripping Springs. In addition to rainwater…