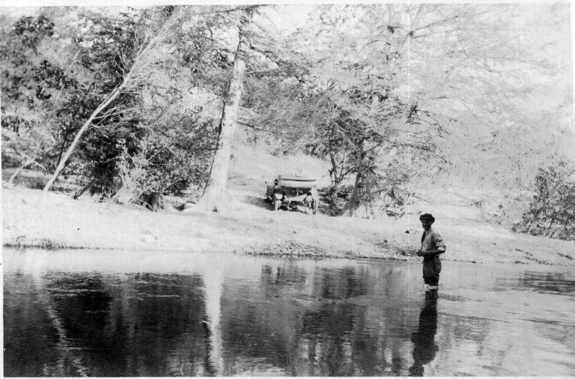 Kendall County’s tradition of protecting natural resources has a long history of gradual recognition of needs and spirited citizen action. This the second in a four part series will trace the history of local conservation efforts up to the present, and encourage both public and private conservation strategies.

In 1935, Col. Rozelle purchased the Herff Homestead and started Pioneer Apple Orchard, proving fancy apples could be successfully grown in Kendall County. Arriving in 4’X8’ crates from Stark Brothers in Missouri, the trees were submerged in the Cibolo until planted. During the historic drought of the 50’s, some Herffs from downstream of the Rozelles asked them to reduce pumping water from the Cibolo so their cattle could drink, but in short order the creek went dry, the cattle were sold, and the apple orchard dried up.

In 1949 Boerne celebrated its Centennial  marketing the town as the “Key to the Hills”. The Chamber of Commerce boasted “good hunting, good fishing, beautiful scenery, modern schools, healthful climate, relaxation and rest.

In 1964, the Boerne Chamber of Commerce proclaimed, “Make Boerne your home. High Hills and deep canyons, beautiful trees and scenic drives where you may feast your eyes upon an infinite variety of wild flowers which blanket the hills and valleys in the spring and early summer and the red and gold of the trees in the autumn. Peaceful and picturesque, yet only a few minutes to advantages in San Antonio, Boerne has been designated by the U.S. Health Survey as one of the three healthiest spots in the nation.”

In 1964 the City of Boerne purchased 125 acres of property on the Cibolo Creek to become City Park.

In 1967 Interstate Highway 10 reduced traffic through town, and there were gloomy business predications. So, Berges Fest (“Hill Country Festival”) was invented, and is now a tradition. The Chamber of Commerce announced: “We have a lot of scenery, a lot of hills and streams and a real friendly-like way of life we want to share with our friends. It is the neighborly thing to do.”

The John D. Reed Dam was constructed in the 70’s for flood control and water supply, and  Boerne City Lake was opened in 1978. Mr. Reed had been the district conservationist, for the Soil Conservation Service. He said, “Most ranchers were satisfied with overstocked and poorly managed ranges… conservation of natural resources is now an accepted way of life.”

The Native Plant Society of Texas began in 1980. Thanks to their tireless work, newspaper articles, and educational programs, many residents are now landscaping with native varieties of plants and trees, and Boerne is a greener place. The Boerne Chapter has donated thousands of hours of volunteer planting of natives at Boerne Lake, the #9 Greenway, the Cibolo Nature Center, and all around town with its Big Tooth Maples Program.

Boerne has always treasured shade trees, and for a while, even in the middle of Main street. In 1987 a landscape ordinance proposed to save green space and heritage trees. Guy Chipman Jr. said, “I have seen a lot of the charm of Boerne disappear. This is a chance to control growth and attract new businesses and people. You have an opportunity that you may not have in the future.” A compromise ordinance passed.

In 1988, Carolyn Chipman Evans and a handful of friends dreamed of protecting a segment of the precious Cibolo Creek, and the land around it as a wildlife preserve. Planning began to address the disappearing marshland and the creation of nature trails on 100 acres of the Boerne City Park. The results were a rebirth to the land and a renaissance of public concern for conservation of Boerne’s natural resources. In 1989 the City of Boerne and the Friends of the Cibolo Wilderness restored a marsh area, planted cypress, sycamore, and dogwood trees, and built a boardwalk. Chris Turk, Director of Parks and Planning, helped design and direct construction.

Open to the public since Earth Day 1990, the Cibolo Nature Center & Farm today is a prime example of community caring. Thanks to thousands of volunteers’ dedicated work, the community is preserving its natural heritage for future generations.

Interested in doing some of your conservation work on your private land? Thomas Hall, Estate Planning Attorney, will present the best practices in estate planning to legally protect and preserve the legacy of land at Boerne’s Cibolo Nature Center auditorium on August 26th at 6 pm. Members: $15; non-members: $20. Come discover how you can continue the tradition of conservation of our wonderful local natural resources. Call (210) 249-4616 for registration and details.

The Future of Conservation in Kendall County, Part 2