Dazzling color and light emanate from each of the winning photographs from Hill Country Alliance’s (HCA) annual photography contest. Soft ripples of lavender and tangerine clouds over a field of wildflowers; an egret perched on a bald cypress branch in the mango light of dawn; ethereal shades of blue in a wispy, flowing river; a golden sunset backdrop for a cruise on Lake Austin—these are the winning images captured by dedicated photographers, to be featured in the HCA’s 2016 calendar. The eagerly awaited annual calendar will be available for purchase on HCA’s website starting September 11.

“These images are absolutely stunning, but beyond the beauty and creative photography, we hope people will be inspired to hold on to the precious qualities of this region for future generations to enjoy,” said Christy Muse, executive director for HCA. “Our familiar swimming holes and favorite vistas need protection, which is why we hope this calendar reaches as many people as possible to create an active citizenry and a conservation mindset.” 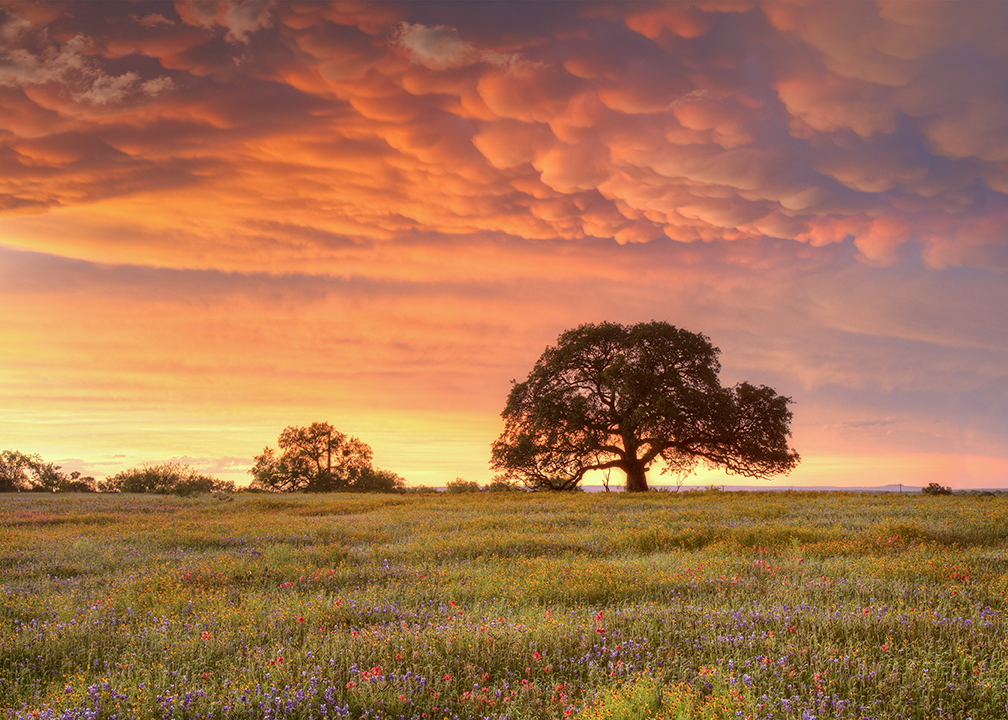 Grand prize-winner, Rob Greebon, enjoys living in Dripping Springs, on the edge of the Hill Country. On a Saturday morning, Greebon and his wife went for a drive up SH 71 to find a field of wildflowers to photograph. Near Llano, they encountered the worst rainstorm Greebon said he’s ever experienced. With lightning still a threat, he captured Wildflowers at the End of the Storm.

“The clouds started to light up, and I knew where this tree was, I knew where this field was, because I’d been out there before,” he said. “It was still sprinkling when I set up and took about five minutes of shots from there.”

Greebon shoots most of his photography around sunrise. “I’m usually back home by the time my family’s eating breakfast.” He submits images every year to the HCA photography contest. His photograph of the Milky Way was included in Dripping Springs’ application to become the first International Dark Sky Community in Texas.

Todd Winters, 1st place winner, lives in Kerrville and finds late November to be the perfect time for photography in the Hill Country. “At that time, we get a lot of fog and mist on the river,” Winters said. “It’s my favorite time of the year here, and the colors of the bald cypress trees are extraordinary.”

Winters’ winning photograph, Autumn River Dawn, was taken on a November morning. He wasn’t prepared to see an egret perfectly framed by bald cypress trees in the glow of the dawn light. He expected the bird to fly away while he changed from the wide-angle to the telephoto lens. But it didn’t. “The egret didn’t leave because he was waiting for the sun to come up too,” Winters said. “As soon as the sun came up, he was out there fishing.”

Winters is a water color painter, and his photography evolved from taking pictures of landscapes for painting. With photography, he’s always trying to be aware of the little surprises. “You just don’t know what you’re going to see on any given day.” 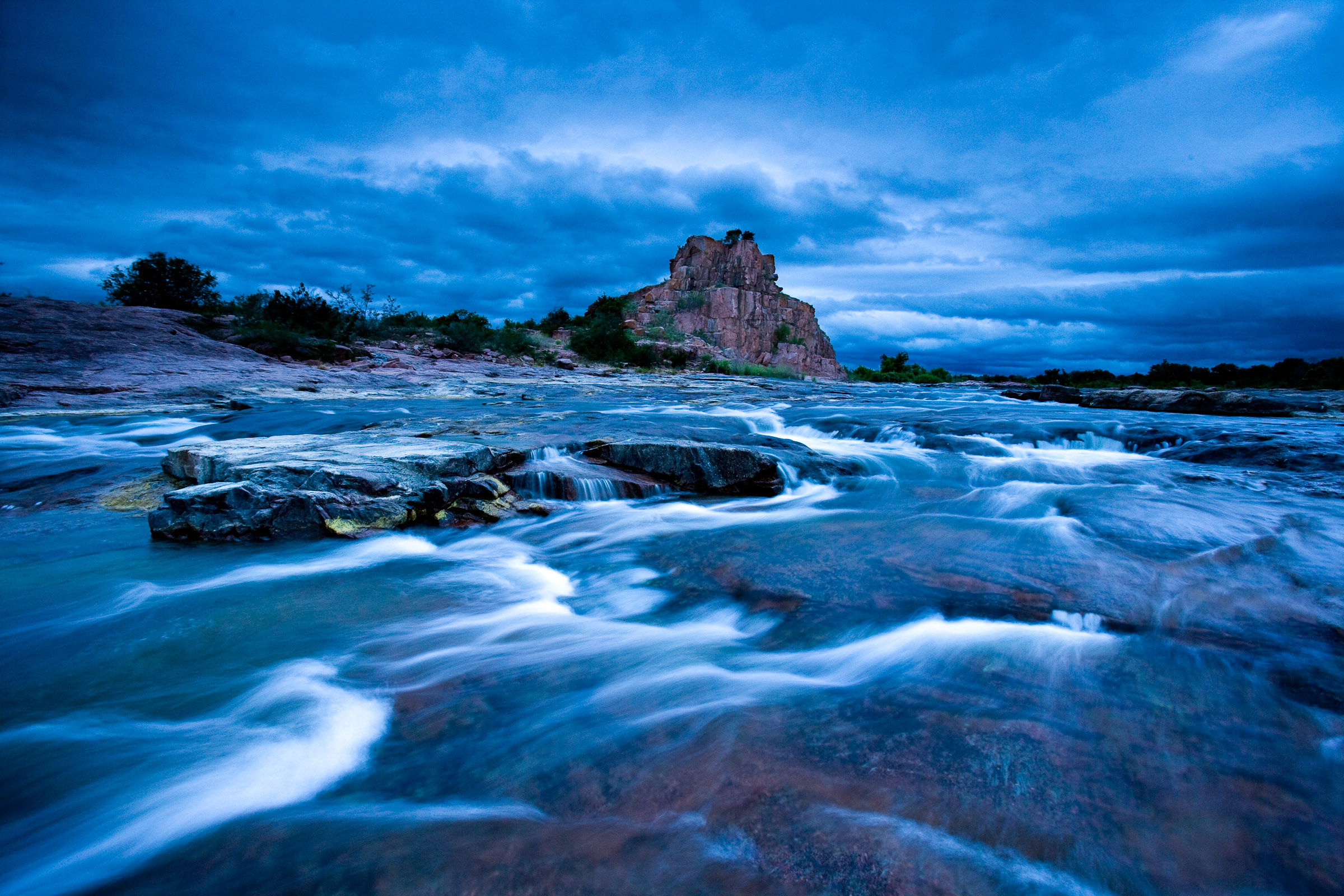 After five trips and 2,000 miles to visit a place he had selected on the Llano River, Jim Olive, who lives in Houston, captured the 2nd place photo. Most of the property along the Llano River is privately owned, so Olive’s first challenge was to gain access to the river. He visited Long’s Bait Camp, a fishing camp outside of Kingsland, and got to know the owner, Malcolm Long. “I made a couple of trips there, and he introduced me to Melvin Webb, an 81-year-old rancher and a friend of the late Senator Maverick and the owners of property exactly where I needed to be.” Through this connection and several other introductions, Olive finally got permission to go down to the river.

On the eve of the day the winning photo was taken, Olive went fishing with Webb and his grandchildren and great grandchildren. “They left, and I ended up sleeping in my car on the riverbank to see what the light would be like the next morning,” he said. When I woke up, that’s when I had to go into the middle of the river to take the photograph.” With a slow shutter speed and a heavy tripod for stability in the water, Olive was able to achieve the sharp picture with long exposures and the right lighting that resulted in Cool Passion, the prize-winning photo.

Olive has been a photographer for 50 years, photographing a wide variety of subjects in more than ninety countries. He plans to give HCA 2015 calendars to those who helped him gain access to the Llano River. 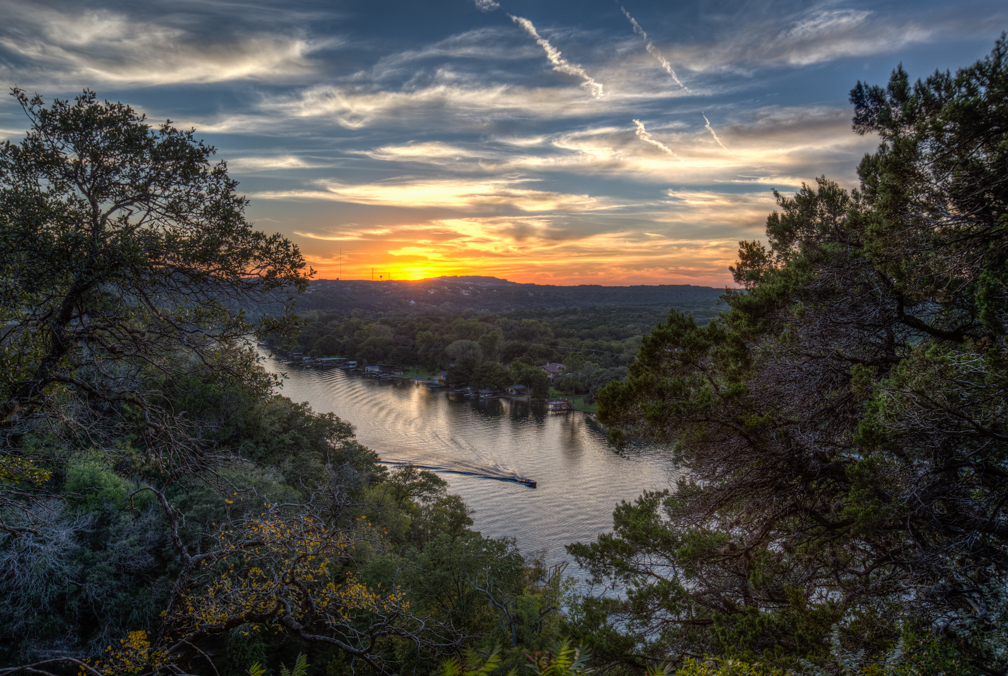 Michelle Michel has been photographing dance and theater performance for many years.  Her 3rd place winning photo, Sunset Cruise, was taken as part of an assignment for a landscape photography class she was taking at Austin Community College. “We were asked to take all knowledge we had gained during the class, propose and create a project, and do a series of photos.”

Michel chose to focus on St. Stephen’s Episcopal School land. “Part of their mission is a fierce preservation and protection of their land, so I wanted to reflect that in the pieces I did,” she said. Michel received permission to go hiking on the land during what she calls “the golden hour,” at sunset, and that’s when her winning photograph was taken. “Basically, I had set up my tripod overlooking the lake from this cliff on the land,” Michel said. “I took a lot of shots, waiting for the sun to set, and then along came the boat around the bend, and I was just going, click, click, click.”

The 2016 Texas Hill Country Calendar will be available for sale through the HCA website on Friday, September 11th, www.hillcountryalliance.org. Wholesale prices for Hill Country retailers and special bulk order prices for businesses and organizations are available.

The Hill Country Alliance is a nonprofit organization whose purpose is to raise public awareness and build community support around the need to preserve the natural resources and heritage of the Central Texas Hill Country. Visit us at www.hillcountryalliance.org. 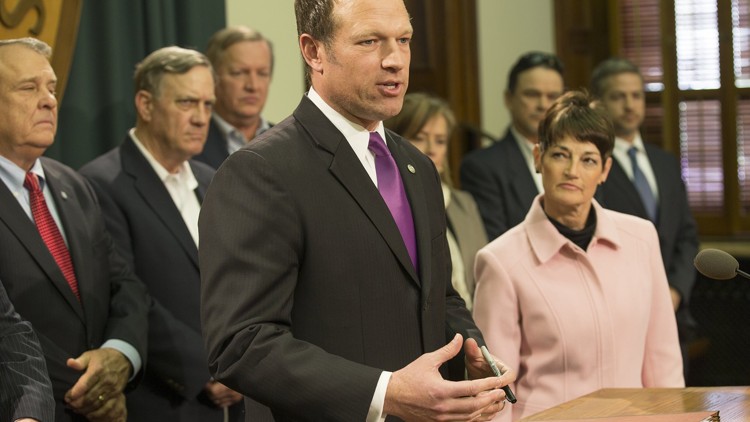 Hays County water fight is back on, 3 years after residents’ big win
Three years ago, Hays County’s grass-roots Save Our Wells group took on a Houston-based company…
A Water Primer from our friends at the Texas Wildlife Association (TWA)
“Springs occur where groundwater from saturated aquifers escapes to the surface, usually amid exposed and… 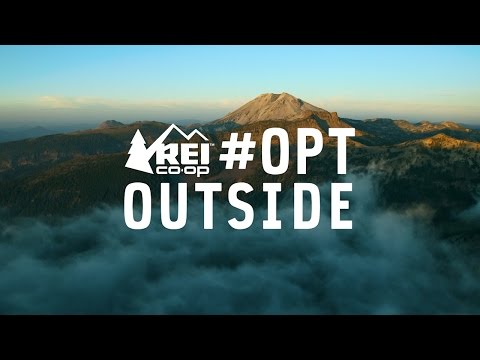