Public trust doctrine at center of fight against privatization

The Texas Foundation for Conservation, a new nonprofit, is joining the fight to protect Texas fish and wildlife for future generations.

Opposed to privatization of wildlife, the group applauds the founders of the North American model for wildlife conservation but endorses the public trust doctrine which establishes a trustee relationship obligating government to hold and manage fish and wildlife for the benefit of all Texans, present and future.

“Those who love Texas fish and wildlife are increasingly concerned about the threat of privatization,” said Dr. Fred Bryant, director of the Caesar Kleberg Wildlife Research Institute at Texas A&M University-Kingsville and president of the Texas Foundation for Conservation. “Native fish and wildlife are no different than our beaches and waterways — they belong to all Texans.”

In addition to the tenet that wildlife are owned by all, other tenets of the foundation are that fish and wildlife should be managed using scientific principles, and private property rights are paramount to the success of wildlife management and conservation.

The public trust doctrine, Mahoney said, dates back to Roman law, was incorporated in the Magna Carta, became part of English civil law, and then became law for the original 13 colonies. Then it carried forward as the founding principle of conservation, not only in the U.S. but in Canada as well.

“Anyone who wants to view this doctrine as some kind of modern phenomenon because of these recent debates over privatization should understand that this is not some sideshow,” said Mahoney. “This is not some water cooler debate. This is a fundamental principle that has been through most of the great upheavals in civilizations in history from the time of the Greeks onward.”

Despite the long history of the public trust doctrine, he said, few school children are taught how the public trust doctrine became one of the founding tenets of the North American conservation model, nor do they know that it was Theodore Roosevelt and a “cadre of other conservation giants” who inspired and instilled this model in the programs and policies of conservation. It was Roosevelt who strongly supported laws such as the Lacey Act, which bans trafficking in illegal wildlife, and amended in 2008, also now includes plants and plant products.

The public trust doctrine, Mahoney told listeners, is one of the most critical pieces of the North American model, but so, too, are the ideas that privatization of wildlife not be allowed. Mahoney pointed to three classic exploitation cases — the buffalo, the passenger pigeon, and the egret, as to why privatization should not be allowed.

“It is unbelievable to think that in a decade we could take bison, perhaps as many as 30 million, others say far more, to the very brink of extinction,” he told listeners. “And the passenger pigeon that one time flew in flocks in excess of a couple of billion birds, a single flock that would darken the skies for days on end in their constant passage over a town, and destroy them, all because of a rapacious taking of wildlife for personal property, for personal gain.”

In the 17th and 18th centuries, the fashion of the time included the wearing of bird feathers in women’s hats.

“We know what happened when egret feathers were worth more than a pound of gold,” he added, “and we know what would have happened to dozens upon dozens of other species had not the idea of democratic ownership and a public doctrine been initiated.”

In Labrador, where Mahoney comes from, people repeatedly raided the nest of the peregrine falcon because 20 years ago they could sell a single chick for $10,000 to $50,000.

It is because of the public trust doctrine, he said, that some wildlife species in the U.S. have gone from a time of virtual destruction to a time now when society complains about too many geese and wild turkey and too many wild deer.

He also contended that through hunting and recreational fishing, both of which are tied to the North American model, the people of the U.S. control one of the “richest companies in the world.” He pointed to the likes of the Bass Pros and Cabela’s, recently bought out by Bass Pro, and the thousands of non-governmental organizations and businesses that rely on hunting and fishing. He reminded that because of the Pittman-Robertson Act, taxes derived from the sale of hunting licenses, hunting equipment and other paraphernalia, a state funding system is used to benefit the conservation system.

“No one else in the world has even thought of this, and you have built this on the basis that wildlife is owned by everyone,” he reiterated.

Furthermore, Mahoney told listeners that to think that wildlife held in public trust and private land ownership cannot work together “is to deny a century of empirical evidence. To suggest that we can replace it and thereby redeem some kind of benefits that exceed what we already have, even in the economic sphere, is at most thin conjecture.”

It should also be noted that as far back as 1842 the U.S. Supreme Court in Martin v. Waddell essentially supported this interaction. Martin owned land along the New Jersey River. He was interested in harvesting oysters and wanted to exclude access to the river and the harvest of oysters in that stretch of the river to everyone else. The Supreme Court ruled against Martin, Mahoney said, and subsequent courts have upheld and refined the premise that fish and wildlife belong to all.

Now it has come full circle. Today some groups like the Texas Foundation for Conservation now fear efforts to privatize fish and wildlife in Texas including not only oysters in Galveston Bay but red snapper and white-tailed deer.

“Animals taken under private ownership become essentially objects that can be manipulated in any way,” Mahoney contended. “One can’t change a few aspects of animals in captivity without changing all kinds of other aspects that aren’t readily visible,” he told listeners. “And if that animal escapes to the wild and distribution of its gene pattern begins, the implications for wildlife in terms of the integrity of wild species but also the health of wild species becomes a crap shoot.”

He said again that the privatization of wildlife is always “incredibly problematic.” Even when enforced with state laws and regulations, he contended that it almost inevitably leads to private markets that are illegal that cannot be enforced.

Mahoney concluded by telling listeners that the debate over privatization of wildlife is not going away. He encouraged all to become involved in the debate to take a stand.

“You all have done extraordinary things with your wildlife resources, and you have done it in Texas in one of the most intensely proud and private rights, private land ownership cultures, even for America,” said Mahoney. “You have found a way to combine two good things in a way that benefits a great many people when you could have easily gone another route, even 100 years ago, and taken wildlife on to yourselves as private landowners. You are deeply, deeply invested in this idea. So you stand in an unbroken line with the giants who built this legacy … all of that is at stake, is at risk.

“Let’s draw the line on this. Let it be here that finally there’s a state to say ‘No, we will not go there.’” 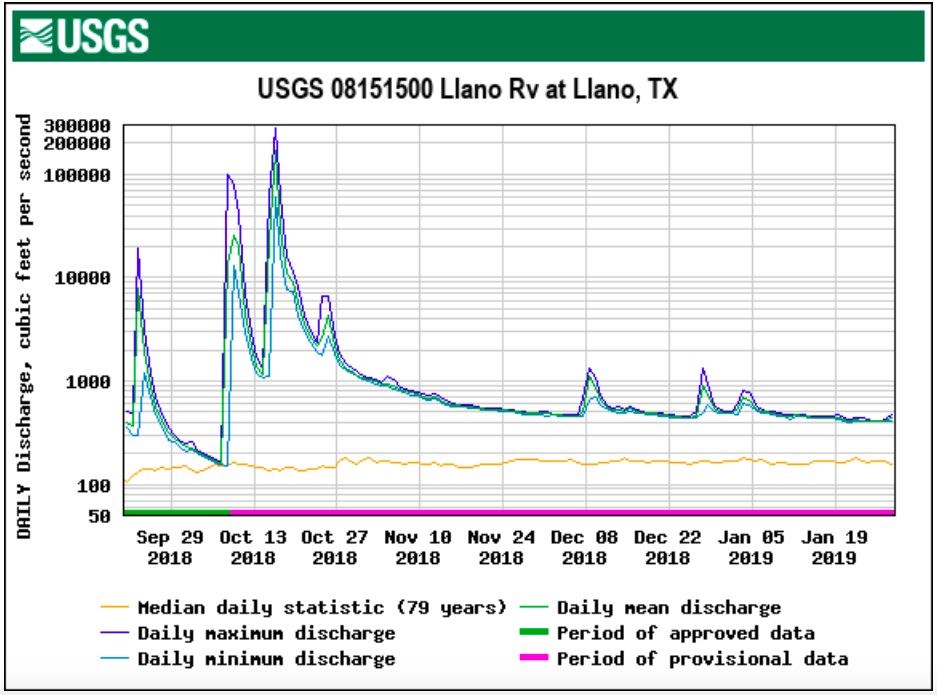 Flows of the Llano still strong
The Llano River continues to flow strongly past the gage in Llano; the latest reading…
2011 Groundwater News
November 16, 2011 Our treasured springs need protection The canary is in the coal mine… 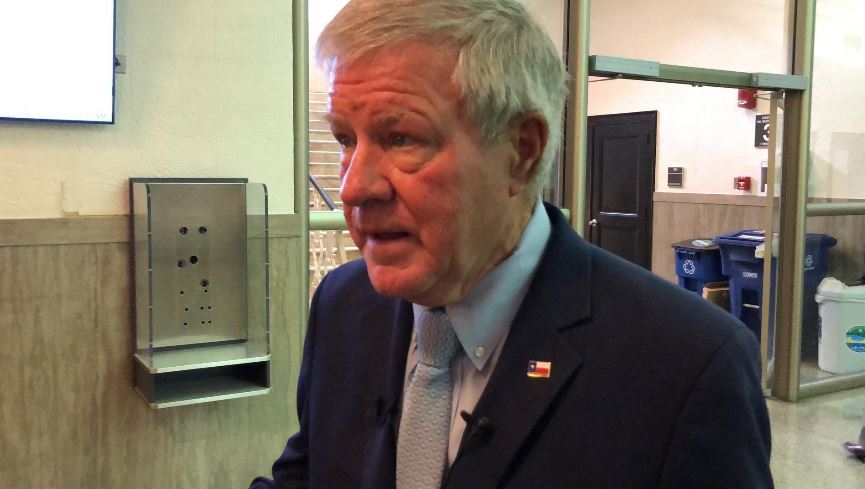