Reprinted with permission from the Austin American Statesman

Developers and life partners Catherine Werth and Joe Wigley began the usual search for water once they decided to build a neighborhood just outside of Dripping Springs, but ended up settling on an unusual source: the sky.

When it rains, each of the 15 homes’ metal roofs will catch the water, which then will collect in a steel drum and flow through filters before running through pipes to the shower or sink. Even in the worst of droughts, rainfall should provide just about enough water, Werth and Wigley said.

The 26 inches of rain the Dripping Springs area saw two years ago would have sustained a household, according to a model done for their TerraScena development. In the deep drought year of 2011, the same household could have gotten 85 percent of its water from harvesting rain and then paid a company to truck in the rest. A month’s supply would cost a couple of hundred dollars.

As communities all over Texas search for alternative sources of water amid an ongoing drought, some homeowners have shown more interest in adding a rainwater tank to their property or using barrels, sometimes enticed by government tax breaks or rebates. But building an entire neighborhood where rainwater harvesting is the main supply strategy is a relatively new concept. The TerraScena development in Dripping Springs is one of just a handful underway in the area.

A Texas Water Development Board study completed last year found it’s feasible and even efficient for a subdivision to rely primarily on rainwater harvesting, especially in the Hill Country. Aquifers there are being depleted and surface water is expensive to pipe, the study said. Rainwater, though, can be a more costly supply, and the lack of regulation can leave homeowners searching for a backup source on their own.

And “there are doubts cast as to whether your normal house-buying public would go for it,” said David Venhuizen, who led the Water Development Board study. “Because they come from city, they turn on the tap, their water comes out. That’s all they know about the water supply system. Whether they could adapt to something where they are really involved and part of their water supply system.”

Werth and Wigley hope their development will draw a community of like-minded people who are conscious of how they use water and other natural resources.

The couple has persevered since the idea for their TerraScena development first took root about a dozen years ago, but it hasn’t always been easy. They were told by several banks it was unlikely they’d get a loan before finding one willing to put up the money that will fund the cost of building the first house. Unable to find a builder, Werth and Wigley are contracting out the work themselves and broke ground last month.

TerraScena would be rare in its reliance on rainwater, but not alone. The Constellation development in Driftwood, which is supposed to break ground next month, will also depend on rainwater, though residents can draw from a backup communal well. Residents who occupy the eight homes built so far at the Preserve at Walnut Springs, just outside of Johnson City in Blanco County, rely on a variety of types of rainwater harvesting systems.

At one home, two freestanding guest apartments and part of the main house have zinc roofs and sides. When it rains, water flows down from the roof into an aqueduct several inches deep and wide, which winds around the side of the house and empties into tanks underground. The downside of the system, though, is that wind blows as much as half of the rain away from the aqueduct, said Paul Sumrall, president of Hill Country Design Build, which constructed the house.

Standing on the Texas limestone porch at another home he built, Sumrall declared, “This is it.” Beneath his feet, he said, was the foundation, and underneath that, two lined concrete tanks that fill with rainwater from the home’s roof.

Scott Swink, who purchased a lot in the Driftwood development, is enthusiastic about rainwater harvesting — but also nervous about running out of water. He’s gotten a taste of what that could be like. Last year, Swink and his family moved to Buda, where they’re leasing a home until they can build one in Driftwood. They came from Florida, where, in the latter half of the 1990s, the well Swink relied on ran dry. Luckily, Swink had gotten hooked up to a city water and sewer system a month before losing the well, he said.

Rainwater harvesting is appealing, Swink said, because “we like the idea of not having to worry about sinking a well, not having to worry about if the aquifer dries up on us.” Hays County, where Swink’s lot is, has the same concern. In 2009, the county adopted a six-acre minimum lot size for some new subdivisions over the Edwards Aquifer to limit the number of individual wells, said Clint Garza, the county’s development services director.

Proponents say rainwater harvesting doesn’t put households at the mercy of the heavens any more than those that depend on the lakes. Plus, rainwater harvesting is a way to get water in perhaps its purest form — and free from fluctuating rates, Werth and Wigley said. So though Werth and Wigley received a contract from the Lower Colorado River Authority to provide water for their development, they ended up going a different route.

“Where does all the water in the lake come from?” Werth said. “It’s a huge rainwater tank, a cistern.” And it’s a cistern that’s not very good at holding water, Venhuizen pointed out, losing a lot to evaporation.

But unlike surface water, there’s little regulation of rainwater harvesting at the state or county level. Hays and Travis counties do require developers proposing to serve a neighborhood through rainwater to estimate the amount of water that will be available from the skies, draft a standard design for a harvesting system and write an operations and maintenance plan, among other items. Counties could go further by requiring developers to detail what arrangements they have made for a backup water supply, Venhuizen said.

Then there’s the issue of cost. A case study in last year’s Water Development Board study found that, in the Dripping Springs area, it costs about $25,600 in today’s dollars to extend a water line to a house and pay water bills for the next 20 years. In comparison, the cost of a harvesting system over the next two decades is upwards of $47,000.

That’s why, in a city like Austin where households can just tap into the water system, rainwater harvesting typically acts as a supplemental source and not the lifeblood of a neighborhood. Still, the city has encouraged the use of rainwater for nonpotable uses by offering rebates of up to $5,000 or half of the cost of the harvesting system. “We’re basically giving a carrot right now,” said Matt Hollon, an environmental planner in Austin’s Watershed Protection Department. As for “the stick part,” that could come soon, he said.

Within the next year, Hollon said, the city staff will ask the Austin City Council to pass an ordinance requiring some developments to not just capture and release stormwater but infiltrate a portion into the ground. One option would be harvesting rainwater and then using it to irrigate yards or plants.

A drop in the bucket

It’s unclear how widespread rainwater harvesting is in Texas, said Robert Mace, deputy executive administrator of water science and conservation at the Texas Water Development Board.

“With water in Texas, there’s no silver bullet,” Mace said. “So rainwater harvesting’s not a silver bullet, but it is another tool in the toolbox that could be used.” 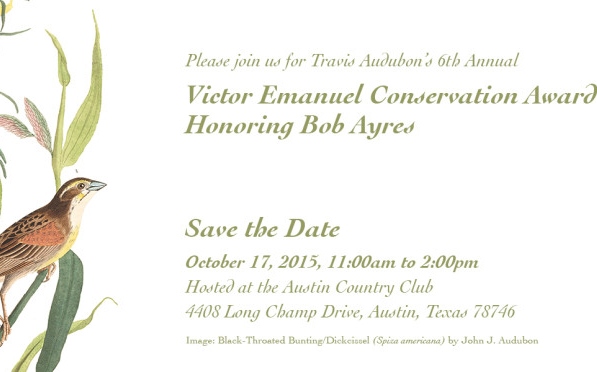 Bob Ayres honored by Travis Audubon
“Bob Ayres and his family are devoted stewards of the land. In 1998, they placed…
PEC Candidate Forum April 24th in Johnson City
The Pedernales Electric Cooperative (PEC) is hosting a candidates forum for two board of director… 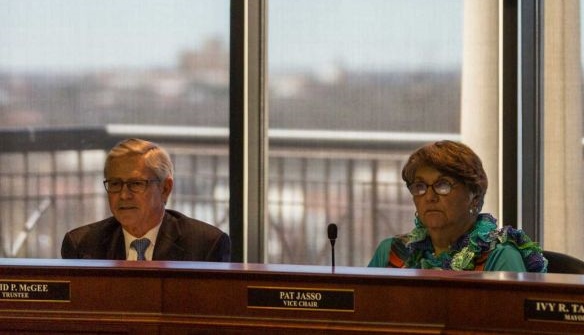