So far, the San Antonio area has escaped outdoor watering restrictions this summer, but that could change next month.

In the past several weeks, the Edwards Aquifer has dropped sharply and is approaching the level that triggers the first stage of cutbacks. 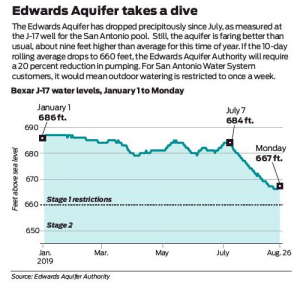 July and August have been extraordinarily hot and dry, like a “flash drought,” said Karen Guz, the San Antonio Water System’s conservation director. There’s been less than a half-inch of rain here since June 30. For the year, rainfall is almost 6 inches below average.

The record-breaking 16.86 inches of rain that fell on San Antonio in September gave the aquifer a boost — then July and August undid it.

“Yes, there’s a significant drop,” Bertetti said. “The drop is fairly typical for times when it’s summer and there’s been no rainfall.”

The EAA will institute Stage 1 pumping restrictions when the 10-day rolling average of the J-17 well, which monitors the Edwards below San Antonio, falls below 660 feet. On Monday afternoon, it was hovering slightly over 666 feet. It has been dropping by about 3.5 inches a day recently.

Letter to the Editor, Legislature approves funding for parks

by Jensie Madden, Comal County, TX, with the Comal County Conservation Alliance Letter to the…